We now have extended our reach to France, thanks to our new French dealer “Le Fourgonneur“, led by Mr. Pierre Debacq. With this, we translated all our brochures into French, which can be found on our website. Furthermore, we’re currently working on translating our website to French. With this new dealer CS-Reisemobile is now represented in France, Switzerland, Belgium, Norway as well as Russia. This shows just how much more important export has become, especially in regards to four-wheel-drive. The amount of four-wheel-drive vehicles we export is around 30% and rising.

A New Generation of CS-Reisemobile 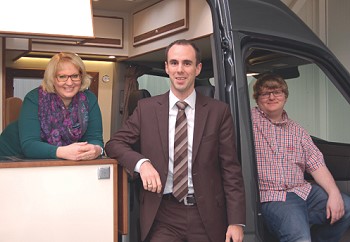 With the daughter, Laura now working at CS-Reisemobile for seven year – three of which as a trainee automobile salesperson – and the son Till who has been a foreign trades trainee for one and a half year, we will soon also welcome Laura’s husband, Philipp Oltmanns into the company. The trained banking administrator will be reinforcing the young generation that will eventually continue the company in the future

Lithium-Ion-Batteries have become very common in everyday life. Nearly every Smartphone and other electronics use them. Lithium-Ion-Batteries have many advantages over the old battery technology. A few important things are the reduced weight, the ability to recharge in a very short amount of time and having all the charged power constantly and completely usable. Appliances that require large amount of capacity haven’t been compatible to lithium batteries so far, due to the relatively high price. However, lithium-batteries are an investment into the future, as they’re able to be charged a lot more often than gel batteries. Thanks to being able to supply its’ entire charge the lithium battery has the same amount of power output with comparatively lower capacity. The 160 Ah lithium battery is able to supply nearly the same amount of power output as our standard 235 Ah gel battery. Another very noticeable advantage is the reduction in weight. Compared to the 72 kg gel battery, the lithium battery only weighs 33 kg. In an era of better equipped but also heavier base vehicles this is a very nice side-effect. Lithium batteries work especially well in conjunction with a powerful inverter, due to the batteries ability to take large amounts of electricity as input and output. Combined with a strong charge booster or recharger, the lithium battery can be recharged within a very short amount of time. At the moment we offer the new battery technology for an extra price of around 2,600 €. This contains the price for a charge booster, which is indispensable for EURO 6 vehicles. Like most other technical areas, it can be expected, that the price for lithium batteries will drop in the future. At that point it will become standard technology for CS-Reisemobile.